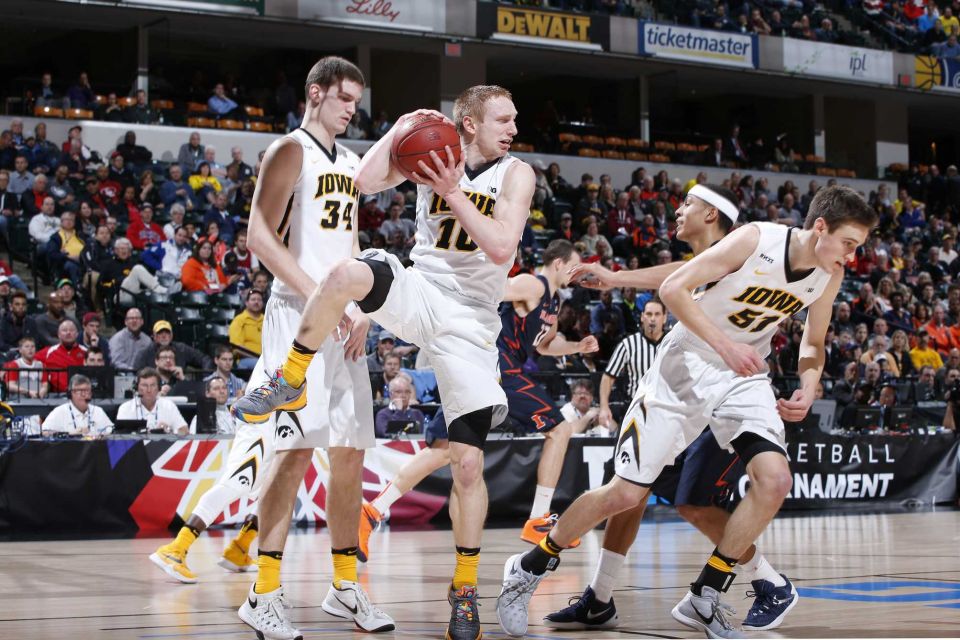 INDIANAPOLIS – He called it a fresh start. After an often challenging season at the University of Illinois, that’s how John Groce, coach of the Fighting Illini, defined the step that began this week. “Sometimes I think we can overcomplicate things,” Groce said. “And I wanted to really simplify it for these guys. All we have talked about, literally…is to play the right way on offense and to play ridiculously hard and compete, because that’s what we do at Illinois. You have an ‘I’ on your chest, you compete.”

The 12th-seeded Fighting Illini earned some validation for another day with a 68-66 victory over No. 5 Iowa that sends Illinois into the quarterfinal round.

Illinois (15-18) will meet No. 4 Purdue in the second game of the Friday afternoon quarterfinal doubleheader at Bankers Life Fieldhouse. No. 5 Iowa (21-10) must find a way to reverse a stretch of six defeats in the last eight games. The Hawkeyes, ranked as high as third in late January, had helped Iowa earn a rare distinction. For the first time in school history, the men’s basketball and football programs were ranked third in the same season.

Now the Hawkeyes, who had once earned the possibility of gaining a No. 1 seed in the NCAA tournament, must confront their imperfections at a point when their season will be defined.

The Iowa loss marked the third consecutive year, and the fourth in the six seasons under coach Fran McCaffery, that the Hawkeyes have lost their first game in the Big Ten tournament. When asked if there was any common thread between Thursday losses in the last three tournaments, McCaffery said, “We didn’t get off to good starts in any of those three games, and I don’t think in a tournament situation that’s a good thing.”

“They were playing with confidence,” McCaffery said of the Illini. “They were shooting the ball. They were moving the ball. [Our] offense didn’t really flow very well in the first half. It was pretty much Pete (Jok) and Jarrod [Uthoff] making shots.”

If one thing has remained consistent, despite Iowa’s struggles, it’s the play of Jok and Uthoff. The two have been dynamic and a key part of the Iowa team this season, with a combined average of 34.6 points per game. Jok did not score until he made a jumper with 7:10 to go in the first half. He went on to score 15 more points in the first half, helping the Hawkeyes overcome an 11-point deficit to come within two points, 37-35, at halftime.

But Illinois responded to a game-tying jumper by Jok early in the second half by building a lead of as much as 11. With 4:02 left in the game, the Fighting Illini led 63-54 after a jumper by Iowa’s Nicholas Baer. After a foul by Malcolm Hill of Illinois, Jok and Kendrick Nunn of the Illini were each charged with a technical foul.

Jok was disqualified with his fifth foul, and Iowa’s leading scorer was finished for the night.

When asked if he could describe his frustration, McCaffery said, “You have no idea how much I would like to describe my frustration. Leave it at that.”

The stands were erupting with excitement and Iowa fans screaming, “More pressure! We need more pressure!” But it wouldn’t be enough. Hill, the leading Illinois scorer with an average of 18.5 points, was held to 6 points on 2-of-9 shooting. But his jumper with 1:16 to play would become the difference.

Nunn’s steal with two seconds to play sealed the win for Illinois, crushing Iowa’s hopes of advancing in the tournament.

For the Illini, there was a chance to earn one more unexpected challenge. “We had our ups and downs during the season,” Nunn said, “but it’s best that we play our best basketball toward the end of the season. It’s March, and March Madness is here. And we’re trying to just play our best.”

This site uses Akismet to reduce spam. Learn how your comment data is processed.